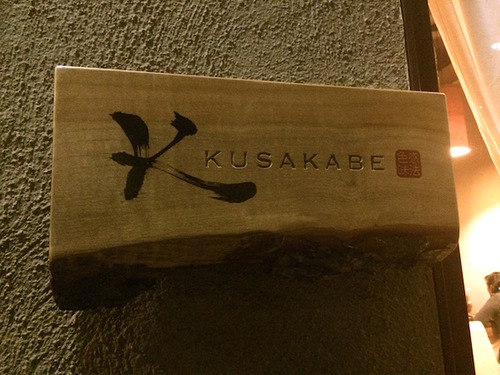 Following the personal that left Sushi Ran in Sausalito for new endeavours in San Francisco over the past few month, I set out to test them all against my benchmark experiences at Sushi Ran.First, I managed to get a sushi bar seat at the not-yet-opened restaurant KUSAKABE, located in the financial district of downtown San Francisco. It is a very small place with roughly 30 seats, half of which are at the long sushi bar. Apparently, it will officially open on Monday, June 16 2014, so I was happy to got squeezed in. It is owned and operated by sushi chef Nori Kusakabe, a former executive chef at Sushi Ran.

Nori Kusakabe is the CEO and Co-owner chef of KUSAKABE. He has been the executive chef at Sushi Ran in Sausalito until November, 2013 where Michelin stars was awarded in 2006 & 2007. He was the Grand Winner of World Sushi Award and All US Sushi Technical Skill Champion. His past experience includes executive chef at the famous NOBU restaurant in Miami Beach.

They offer a fixed omakase menu for 95 $ which takes you on a journey through the highlights of Japanese cuisine. It contains a mix of mostly nigiri, very few sashimi as well as some sushi rolls, miso soup and other warm dishes. After around 10 courses you can still choose from the à la carte menu, which has a limited offer of additional nigiri and some deserts. Here are some pictures I took during the evening.

The fish was delicious and very intense for it was served very traditionally without any fancy sauces or anything. So it really was kind of like Sushi Ran, but with a twist to it. There are some more people from Sushi Ran there in addition to the chef (1 additional chef, 2 waiters and sommeliers). Everybody was very nice and forthcoming and I even recognised some people from my visits to Sushi Ran.

What I didn’t like so much is that I couldn’t really choose what to eat. I don’t mind a soup but I would have enjoyed more sashimi. Even the à la cart items are only available as nigiri and the variety of fish is very limited. I asked about it, and they will keep the omakase style menu as a key element of their concept. Also I didn’t like that the fish was mostly preprepared und was just arranged at the bar. I suppose it makes sense because of the omakase menu style, but I really enjoy watching the sushi chefs do their magic with the knife. They also do not have any bar fridge where you can look at the fish. It’s stored away in under the sushi bar due to the open design of the restaurant. The interior is a mix of raw brick walls and lots of bamboo elements. I am not sure wether the decor is finished already, but it seemed a little steril and cold for my taste.
All in all it was a great dinner with delicious and very superior fish and I do not regret going there. In terms of the fish’s quality, Kusakabe can match Sushi Ran in fact. But, to be honest, I will gladly come back to Sushi Ran because of the larger variety in their menu and the ambience of the restaurant.
But still, if you are in the neighbourhood, give Kusakabe a try. I am sure they are here to stay since they stand out within San Francisco due to their quality approach and kaiseki style cuisine. 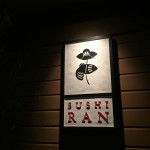 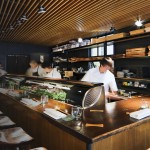